Concluding its distinguished career in November 2003, the last Concorde ever to fly, Alpha foxtrot (piloted by Captain Les Brodie) flew over the iconic Clifton suspension bridge then on towards Filton. Once in sight, they initiated the landing procedure and for the very last time, placed those long landing legs on terra firma at the Airbus factory runway in Filton.

For the next 13 years Alfa Foxtrot sat outside in all weathers, looking forward to the day when she would receive a better home. After much funding and planning, a bespoke hanger was constructed to house Alpha Foxtrot (it was high time this elegant supersonic lady of the sky had a roof over her head). The doors were finally opened to a very appreciative public in October 2017.

The conservation team at Aerospace Bristol (headed up by Paul Jones) were looking for ways to bring the now static Alfa Foxtrot back to life, to give the public the opportunity to experience additional elements of the aircraft not normally seen other than in active service.

Oliver Starr (owner and managing director at Zeus Hydratech) explains that it was during a family visit to the Aerospace Bristol museum, that he struck up a conversation with one of the friendly volunteers on site regarding the possibility of bringing the iconic hydraulic droop nose back to life. Later that week we received a call from Paul Jones who expressed his interest in making the project happen, his aspirations were to coincide the nose move with a prestigious VIP event happening in April 2019, when they would celebrate 50 years since the maiden flight of Concorde from Filton.

Due to the complex nature of this project, we met with key members of the team to discuss where our bespoke hydraulic power pack would be located. During the initial meeting, the brief was to install the unit in a location where it would not be seen, ensure the unit was as quiet as possible, reduce the risk of oil spills to zero and finally, utilise the existing cockpit controls to actuate the nose movement - phew!

After collating all the required parameters for the power pack including oil flow, operating pressure, controls and instrumental feedback systems, we set about finding the right combination of components to allow us to manufacture the perfect power pack solution. It was essential the power pack unit gave the required flow and pressure to operate the nose correctly. In addition to the outline performance, it was decided by the Aerospace Bristol team that all the original cockpit controls would be utilised to control the hydraulic nose. To facilitate this, we included a digital pressure transducer (to give accurate system pressure in the cockpit) a digital low-level switch for the oil reservoir and finally, a 24vdc operated valve to bring the power pack on line. 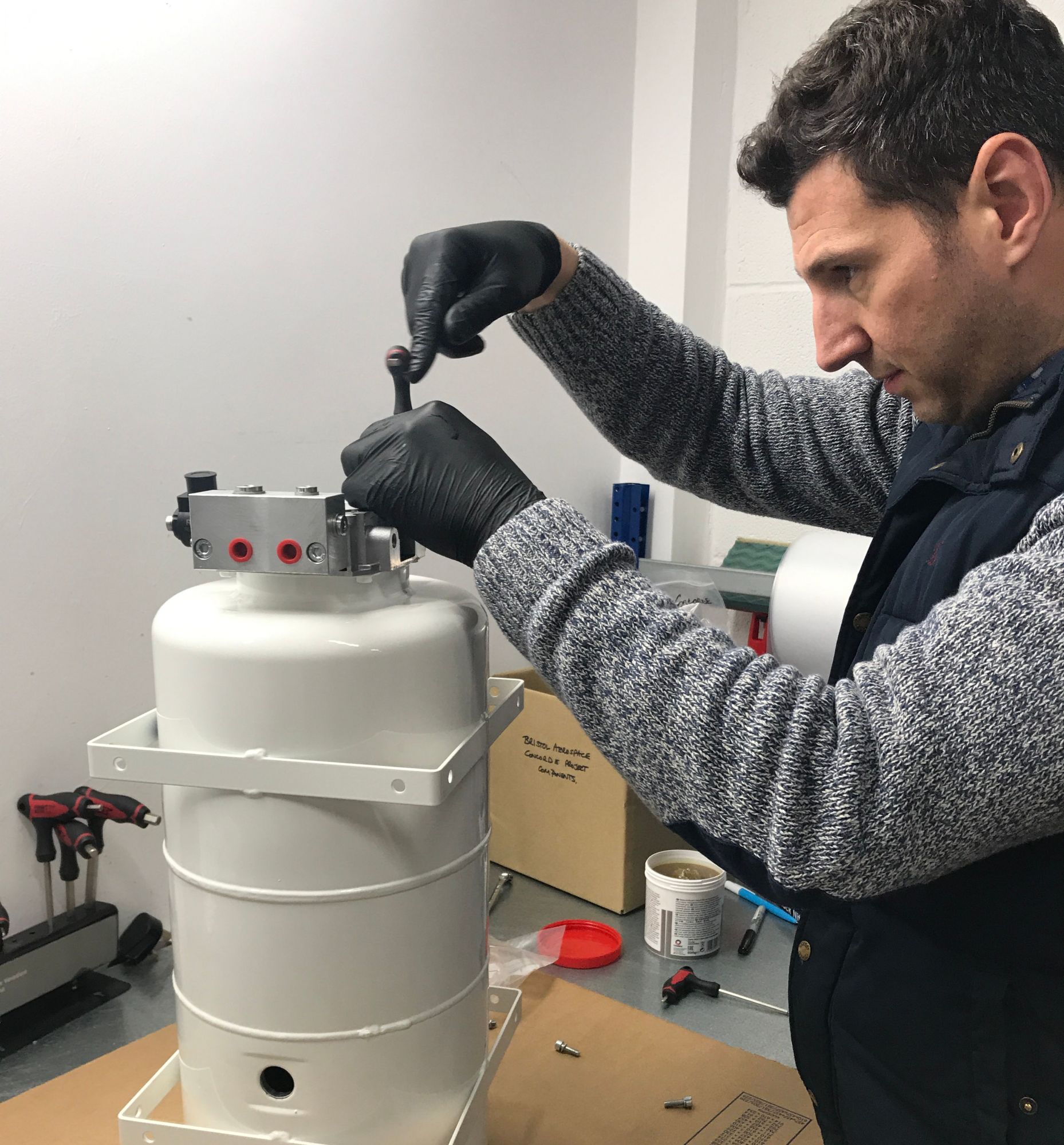 We utilised a horizontal power pack configuration as this would allow the power pack to be situated in the upper half of the front nose wheel bay.

Technical drawings of our power pack were submitted for review, their engineers satisfied themselves it would fit and give the required performance then manufacture of the power pack started shortly after.

Three weeks later we arrived on site with our made to order power pack unit, the oil reservoir had been specially painted in white to match the Concorde.

The power pack was installed by Zeus Hydratech inside the front nose leg bay, sitting on a purpose-built aluminium frame. Once installed, all associated hoses and valves were connected.

When Concorde was originally commissioned for flight, a purpose designed oil was developed to ensure it was happy to operate at the extreme temperature ranges experienced during supersonic flight. Fortunately, the volunteers were able to acquire a large quantity of this special oil (Exxon M2-V) and so this was used to fill the new power pack system to prevent cross contamination with the existing circuit. 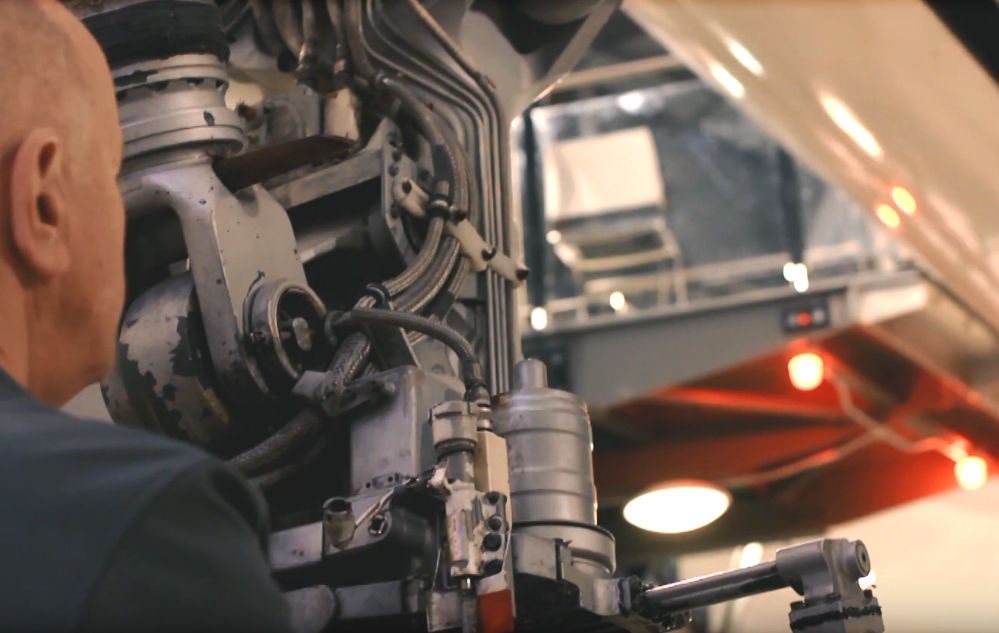 As the Concorde hydraulic system had not been operated since its last flight in November 2003, we ensured the initial start-up procedure was handled with great care, bringing the pressure up slowly and checking for any leaks within the circuit. Once the power pack was up to the required pressure (240 Bar), the nose controls were actuated from the cockpit – after some initial squeaks and a few groans, the nose security clamps opened with a reassuring clunk and the sliding windscreen came down, followed by a momentous downward movement of the nose!

Lloyd Burnell, Executive Director, Aerospace Bristol  (pictured below), said - "We're extremely grateful to Zeus Hydratech for providing the power pack for this exciting Concorde50 project. Thanks to their generous support, Aerospace Bristol will be able to make the droop nose of Concorde Alpha Foxtrot - the last Concorde ever to fly - operational once again, in celebration of 50 years since Concorde's maiden flight". 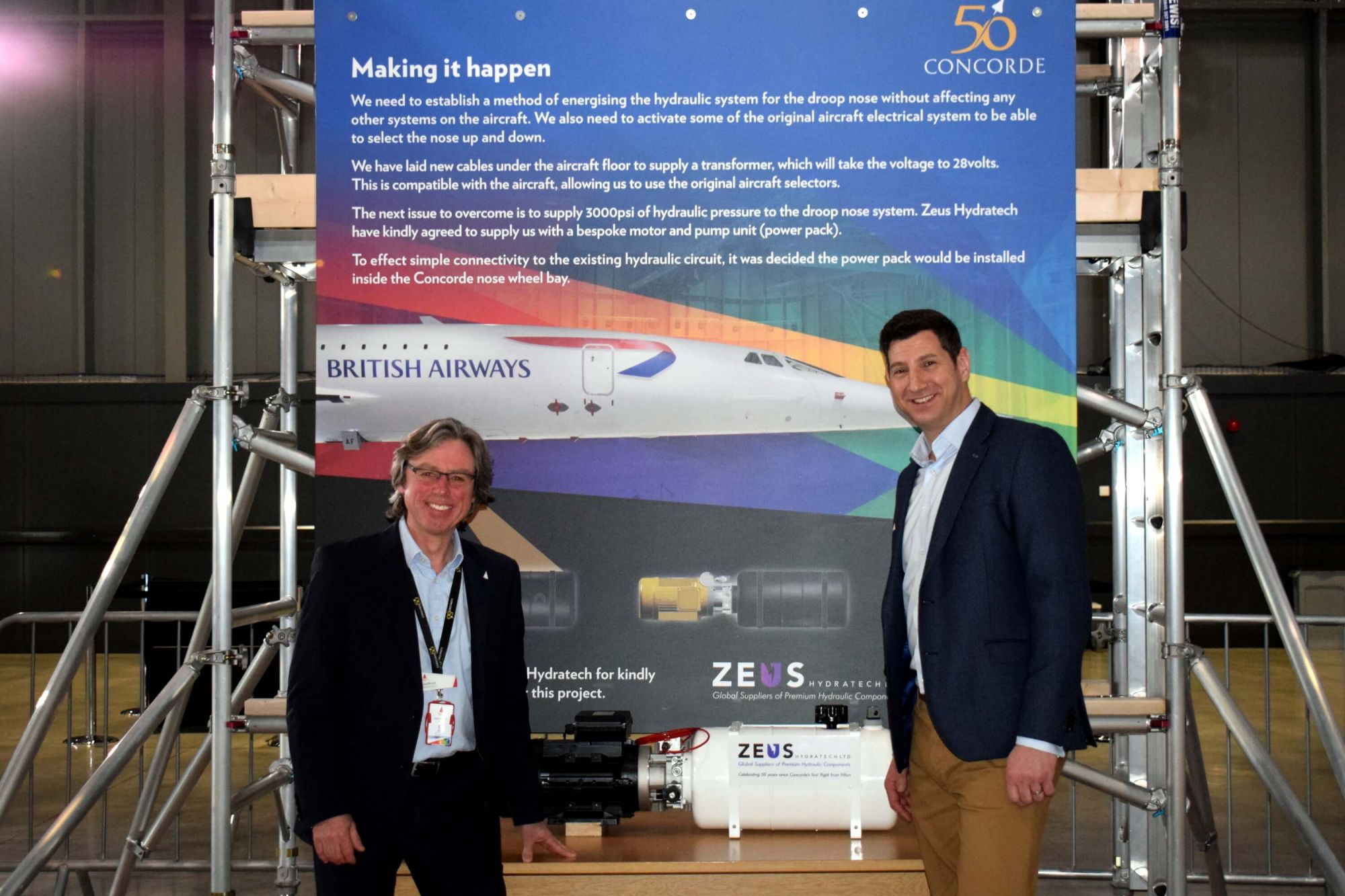 Oliver Starr, Mananging Director, Zeus Hydratech  (pictured above), said - "It has been a real privilege to be part of such an exciting project - the opportunity to bring our expertise to a project that is so truly iconic and will bring joy to all that see it operating, was something we just had to be involved with".